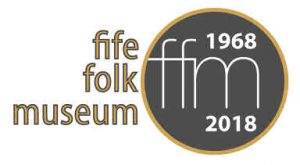 What our visitors say...

"This museum is a gem! Well itemised & labelled. Staff are friendly & helpful. The entire museum is excellent"

"An excellent exhibition, very well laid out with many interesting items to view"

"Lots of memories of grandparents tales and their lives."

"Little gem of a museum. My 4yr old loved looking for the cars & dressing up."

"Good looking back in time, lots of memories."

"Wonderful museum, so informative and well laid out."

Fife Folk Museum is located in High Street, Ceres. Its premises consist of the former tolbooth of the burgh of barony, some early-19th- century weavers’ cottages, and, across the road, a modern annexe (opened 1984). The Museum is situated within a conservation area. All its buildings on the south side of the High Street are A-listed, including all garden and other walls. 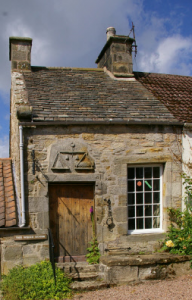 Ceres was created a burgh of barony under the Hopes of Craighall in 1620. In 1673 they built a tolbooth, at a cost of £1,036 10s 4d Scots (about £86 sterling). This was a simple building, consisting of a prison cell in the basement, and a weigh house on the ground floor. This was where the standard weights were kept, so that checks could be made on market days, the forerunner of the Trading Standards Officers of today. By the1960s the building was being used as a potato store, and was in poor condition. Photographs from c.1895 and 1939 both show the Weigh House with a double door where the window now is, to the right of the front door, for which the raised area in front served as a loading

platform. This may indicate that its use as a potato store dated back into the 19th century. The tolbooth, normally now referred to as ‘The Weigh House’, is a rare survival of its type, and perhaps the oldest building still in use in the village. There are

jougs attached to the wall beside the front door, and over the door a carving of a weigh beam and the motto “God Bless the Just”.

The building was given to the Central (now Cupar) and North Fife Preservation Society by the Mitchell family of Ceres in 1964, and re-roofed with a grant from the National Trust for Scotland. The rest of the High Street was also in a dilapidated condition. The adjoining cottages (both with closing orders) were bought by the Society for £50 and £500 respectively along with the garden ground between the cottages and the burn. The acquisition of the cottage next to the Weigh House prompted the idea of founding a Museum reflecting the history of the people and livelihoods of the area.

The buildings were restored by Murray Jack, architect, with the backing of Fife County Council, and grants from the Historic Buildings Council, the Russell Trust and the Dalrymple Trust. The work was carried out in phases. The Weigh House and the Main Room were opened in 1968, and the rest of that part of the Museum, including the lean-to at the back, in 1974, mainly financed by a grant from the Carnegie UK Trust. The Museum collections grew, and the buildings rapidly filled up. By 1981 more space was needed, not only for displays, but for a shop and a workshop. 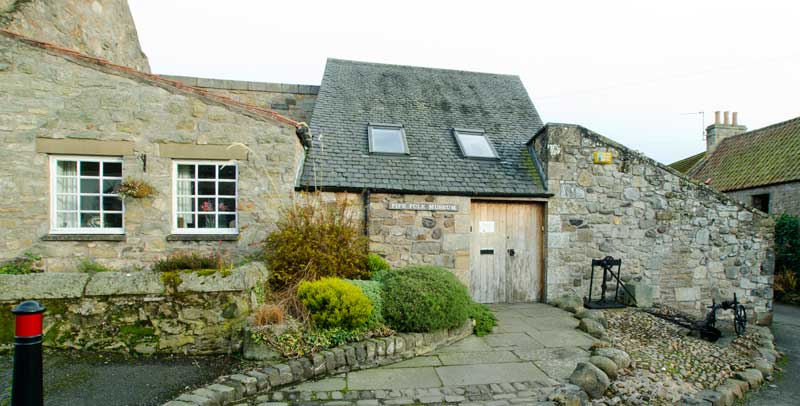 Derelict ground on the opposite side of the High Street was conveyed to the Society by Fife County Council, and the Extension was built by Ian Ross of Hurd Rolland Partnership, with grants from the Countryside Commission, the Pilgrim Trust, the Russell Trust, Fife Regional Council and North East Fife District Council. It was opened in 1984 by Sir John Gilmour.

In 1982 the remaining garden ground adjacent to the Bishop’s Bridge was purchased. But plans to make a gardening exhibition in that area were put on hold when it was found that the retaining wall was in a dangerous condition.

In 1984 the terraced garden area was opened. The following year a donation from the Playfair family allowed the Weigh House and Dungeon to be upgraded.

The Museum won the Europa Nostra Diploma of Merit in 1985, for “the admirable restoration and adaptation through voluntary dedication of the 17th century Weigh House and adjoining cottages as a Folk Museum”. The same year the Extension gained a Civic Trust Commendation for its “contribution to the quality and appearance of the environment”. In 1988 the Museum won a Tennant Caledonian Community Award. In 1989-90 the retaining wall between the Museum and the Bishop’s Bridge was rebuilt, with financial assistance from Fife Regional Council, North East Fife District Council and Historic Scotland. In 1991-2 the attic store was upgraded with grant aid from the Scottish Museums Council.

In 1992 the Museum was granted full Registration by the Museums and Galleries Commission, London. As part of this process a separate Trust, with separate charitable status, was established on 22nd May 1992. The Fife Folk Museum Trust has been an independent body since that date. In May 2002 Registration Phase Two was approved. Accreditation, stage three of Registration, was awarded in July 2010 and full registration in 2014. This is an achievement for Fife Folk Museum as it testifies that the Museum meets the national standards in all aspects of care of the collections, environmental standards and customer care.

Between 2003 and 2004 the old buildings underwent a major restoration, with grant aid from the Heritage Lottery Fund, Historic Scotland, Fife Environment Trust, and Fife Council. Additional grant aid the following year allowed us to reduce the slope on the ramp access to the Extension, which is not a listed building and so was not included in the restoration project. The garden area was made more accessible, including a bridge across the burn from the car park. Inside, new cases have been donated or purchased, with grant aid from Museums Galleries Scotland and the Friends of Fife Folk Museum, an organisation created in 1998 and re-formed as the Members of Fife Folk Museum Trust in 2009.

The new Visitor Centre opened in April 2014 and forms the main entrance to the Museum, an easy stroll from the car park via the footbridge and with disabled access. 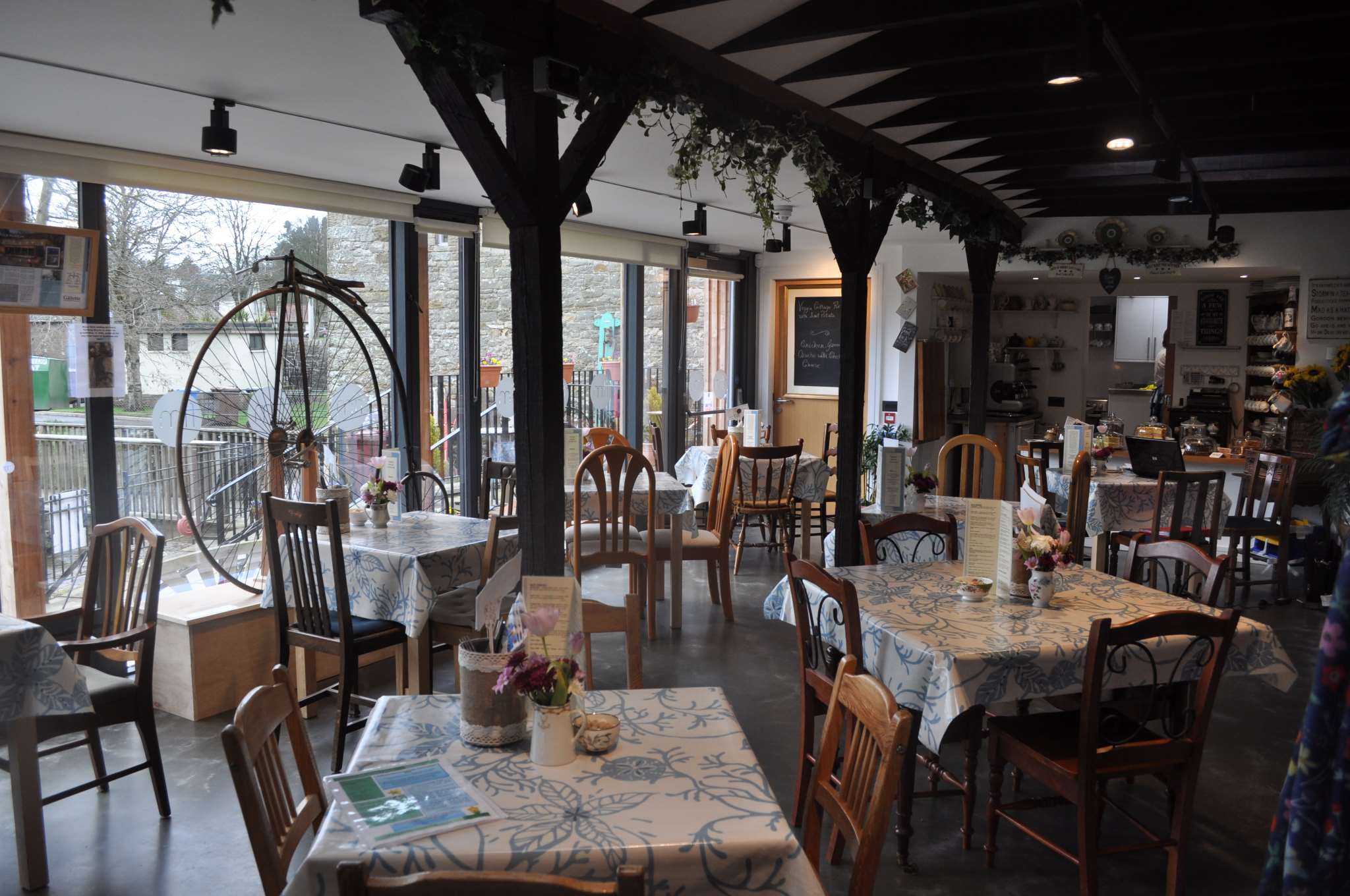 Once inside, visitors find the Reception Desk, the Museum Shop offering attractive gifts and souvenirs and the Weigh House Tearoom. Its varied and delicious menu provides a chance before or after a Museum tour to relax and enjoy the view out to the Bishop’s Bridge and Ceres Burn.

The property is owned by the Cupar and North Fife Preservation Society, and leased to the Trustees for a nominal rent. Fife Folk Museum is managed by the Board of Trustees, with professional advice provided by the Museum Mentor and supported by a pool of 40-50 volunteers who staff the Museum during opening hours, and help behind the scenes with documentation, conservation, education, and publicity.